It’s all about Europe at Vienna’s Imperial Treasury

In July Austria assumes the presidency of the Council of the European Union. This is the occasion for lively debate about what Europe is, and what it should be in the future. The Imperial Treasury in the Vienna Hofburg is well-suited as a forum for this discourse, for many of the objects preserved here are directly related to Europe’s past.

Neither geographically nor politically was Europe ever a static, homogeneous entity. This is reflected in the European Union’s motto, “United in diversity”. It is the starting point for the Imperial Treasury’s project, It’s all about Europe!, which seeks to spotlight the continent’s cultural diversity.

It is from the European perspective then that twelve objects are examined afresh. The intention is to elucidate the historic context in which these works of art were created, and thereby to make perceptible the diverse roots from which the “European Idea” grew. 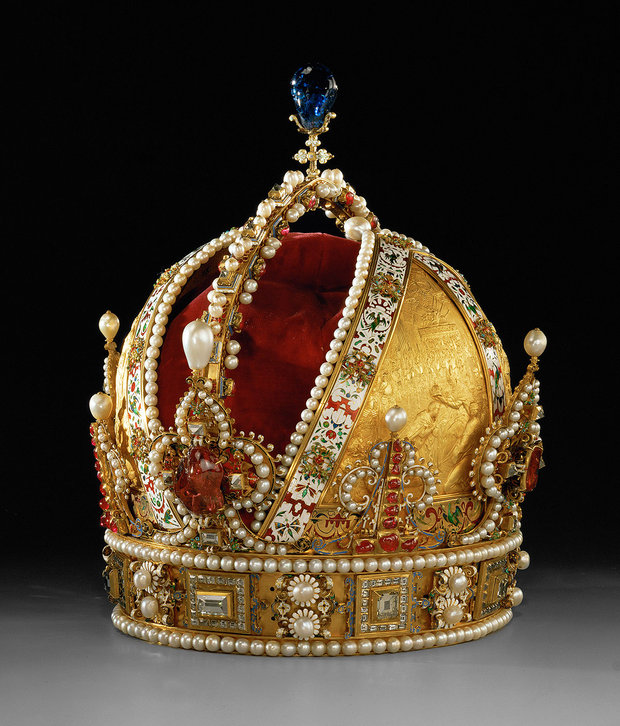 Court goldsmith Jan Vermeyen, who was born in Brussels, fashioned this crown for Emperor Rudolf II in Prague in 1602.

Vermeyen portrayed his patron on the crown four times in his four dignities. The golden side plates depict Rudolf as victorious general (imperator), emperor (Augustus) at his coronation in Regensburg, king of Hungary on the coronation hill in Bratislava, and as king of Bohemia at Hradčany castle in Prague. The object was created as a personal crown for the emperor. With the proclamation of the hereditary Empire of Austria by Emperor Franz II (I) and the dissolution of the Holy Roman Empire this became the official Austrian imperial crown. We may thus encounter it frequently even today, sometimes in stylised form, upon the public buildings of the former monarchy.

A Turkish crown for Hungary? 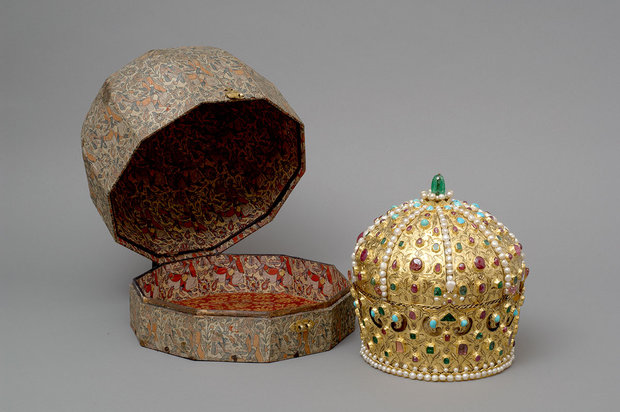 This crown figured briefly as the focus of geopolitical conflict. In their uprising against the Catholic emperor, Rudolf II, the Protestant mining towns of Upper Hungary received support from the Ottoman sultan, Ahmet I.

The sultan had the leader of the revolt, István Bocskai, invested with this crown near Pest in 1605, thereby signifying recognition of him as Hungary’s sovereign. In so doing, the sultan implicitly withdrew his recognition of Rudolf II as king of Hungary and established Ottoman suzerainty over Hungarian territory. The Habsburgs eventually succeeded in reasserting their title to the Hungarian throne, and in November 1609 the kingdom’s diet presented the crown to King (later Emperor) Matthias. The latter also bore what was regarded as the sole legitimate Hungarian crown, the holy crown of St. Stephen. Ultimately, on 4 October 1610 Bocskai’s crown was brought to Vienna by György Thurzó, the palatine of Hungary. 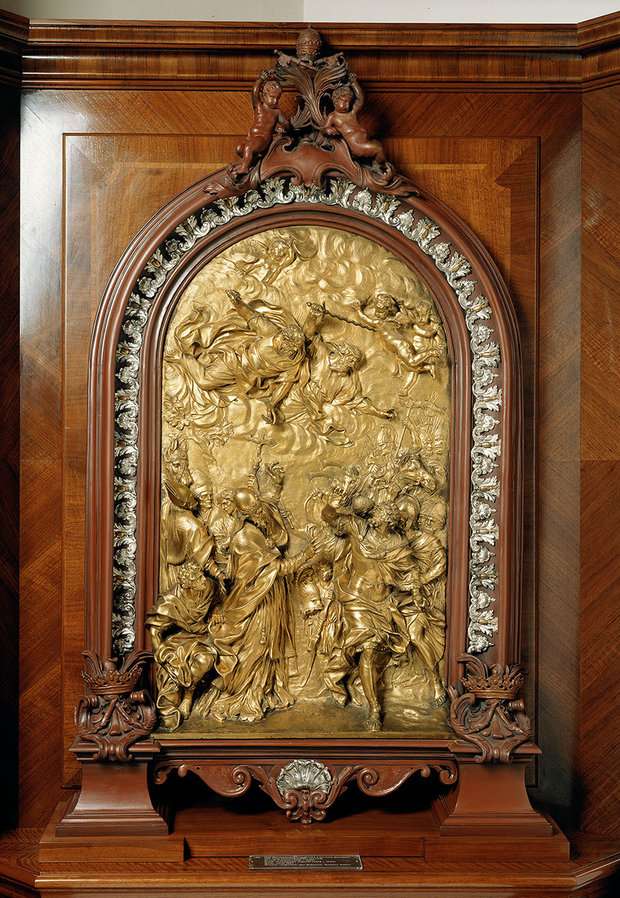 This relief celebrates the triumph of papal authority over secular might. In 452 the Huns led by their king, Attila, fell into Italy, late waste to Aquileia, and threatened Rome.

Pope Leo set out to negotiate. By the gift of large sums of money the pope was able to persuade Attila to retreat. In this way Leo the Great saved Rome, Italy, and the res publica Christiana. The hyperbolic mythologizing of the event tells of the miraculous intervention of heaven: the sudden appearance of the apostles Peter and Paul terrified the pagan Attila, putting him to flight. The Roman sculptor Algardi carved a colossal marble relief depicting the dramatic tale for St. Peter’s basilica in Rome in the 17th century. His student, Ercole Ferrata, created this small-scale version of the relief in bronze, which probably came to Vienna as a diplomatic gift from Rome to the imperial court. 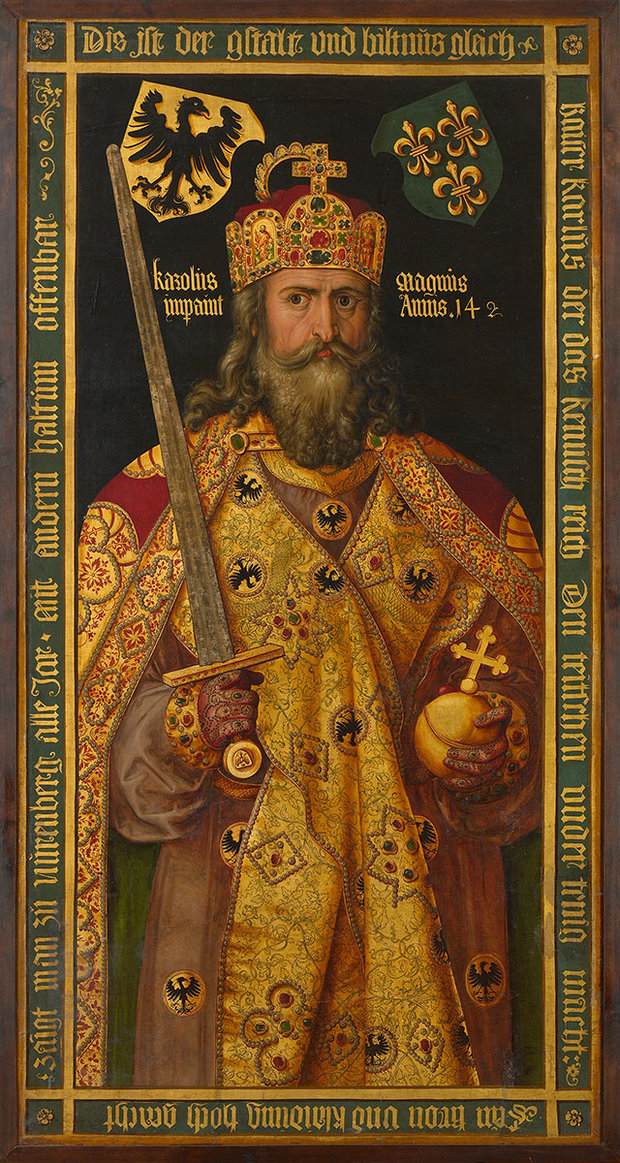 Bearing the insignia of the Holy Roman Empire, grasping firmly sword and orb, the imposing emperor gazes, almost like God the Father, upon the viewer.

This idealising portrait, one of several copies made of the original painted by Albrecht Dürer in 1512/13, does not aspire to be a true-to-life likeness of Charlemagne, who died in 814. Instead, the representation intends to underscore his immense historical significance. Charlemagne, so the portrait’s message, was founder of the Holy Roman Empire and the first to bear imperial crown and coronation robes.

Charlemagne endeavoured to bring unity and peace to his empire—whose borders corresponded roughly to what today is central Europe—that was established through crusades and interest-driven politics. As such he may be regarded as the father of Europe, as is recalled annually in Aachen by the award of the city’s International Charlemagne Prize.

Demise and birth of European order 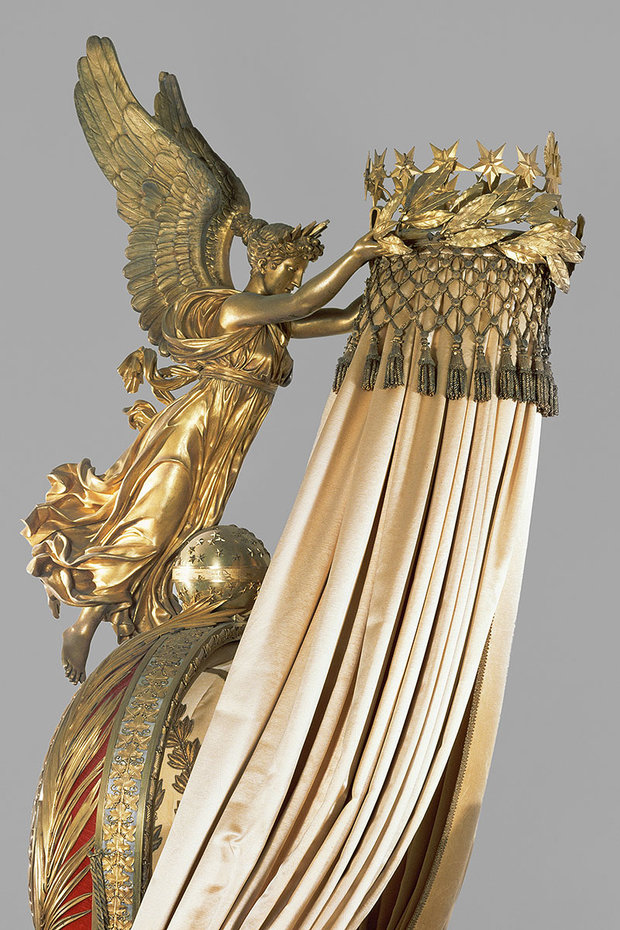 By his military victories on the battlefield over Austria, Prussia, and their allies, Napoleon Bonaparte dealt the deathblow to the Holy Roman Empire, which for over a millennium had been the axis of European power, and established the French Empire.

To elevate his prestige—he was a scion of the lesser nobility—Napoleon sought a matrimonial union with one of Europe’s ancient ruling houses and eventually wed Marie Louise, the eldest daughter of Emperor Franz I of Austria in 1810. Their son was given the title of King of Rome on the day of his birth. In this way Napoleon documented his own aspirations to universal dominion. The throne-cradle of the future monarch was fashioned of 280 kilogrammes of gilded silver and was thus more a showpiece than furniture for everyday use. The cradle’s ambitious iconographic programme expresses the grandeur and glory of the French empire.

Heirlooms of a European dynasty 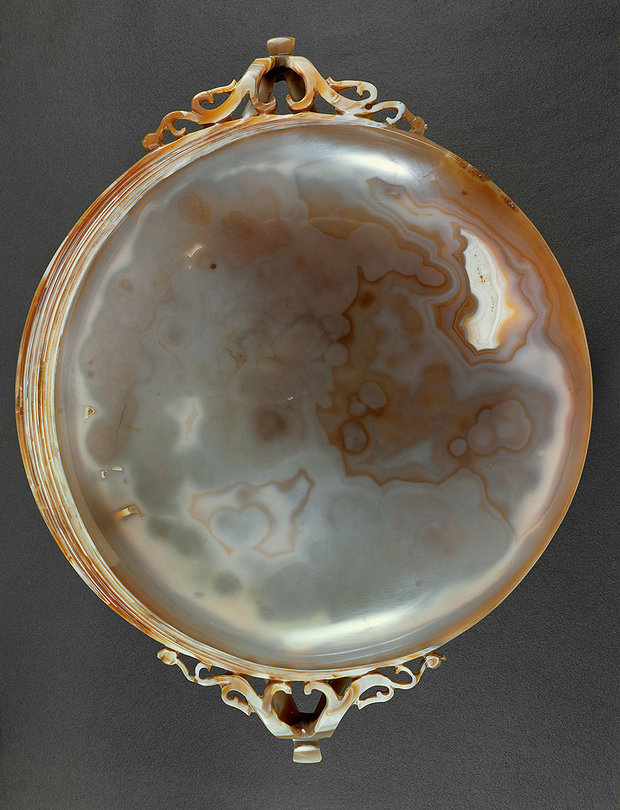 Art objects too served the Habsburgs as a vehicle for expressing their preeminence as a European power.

Among the many precious objects that the Habsburgs amassed in their Kunstkammer and Schatzkammer (chambers of art and curiosities), two were of exceptional importance: the Ainkhürn, which was held to be the horn of a unicorn, and this agate bowl. Both artefacts were declared “inalienable heirlooms” of the dynasty in 1564. In the case of the bowl, certain characters in the veins of the stone were the reason for this special status. These may, under suitable lighting conditions, be read as ‘XRISTO’ and hence as an allusion to the Christian narrative of salvation. The polished bowl was created from a single block of agate in late antiquity in Constantinople; it is the largest of its kind in the world. When and how the object made its way to central Europe remains a mystery to the present.

Coronation Mantle–Europe and its neighbours

For centuries the mantle of red samite, or incised silk, was believed to have belonged to the coronation regalia of Charlemagne (ruled 768–814). It was laid upon the shoulders of all the kings and emperors of the Holy Roman Empire at their coronation.

The origins of the precious mantle are to be found in another part of the world however. Arab craftsmen created it in Palermo for the Sicilian king, Roger II, in 1133/34. This can be concluded based on the Arabic inscription that runs along the edge of the cloak. The motif of a lion triumphing over a camel goes back to the ancient Orient and was adapted to the Arab artistic aesthetic under the Normans. Under the Hohenstaufen dynasty the mantle made its way to the German cultural sphere. The exotic motifs may well have amplified the aura of this unique garment.

The current political situation on the herald’s back 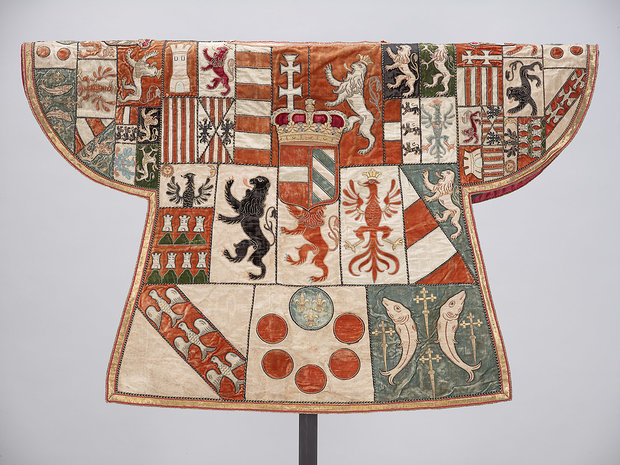 When Empress Maria Theresia attended an official ceremony she would be accompanied by a herald. The armorial bearings adorning the herald’s tabard told those present of the territories over which the empress ruled.

The great number of lands represented on the garment gives an inkling of the challenge to act as a figure of integration and identification. At the same time, recent changes in Europe’s borders are reflected: when the tabard was fashioned in 1742 Maria Theresia had been compelled to cede Silesia to the Prussian king, Friedrich the Great, in the wake of severe military defeats. Silesia’s arms are thus missing from those reproduced on the tabard. 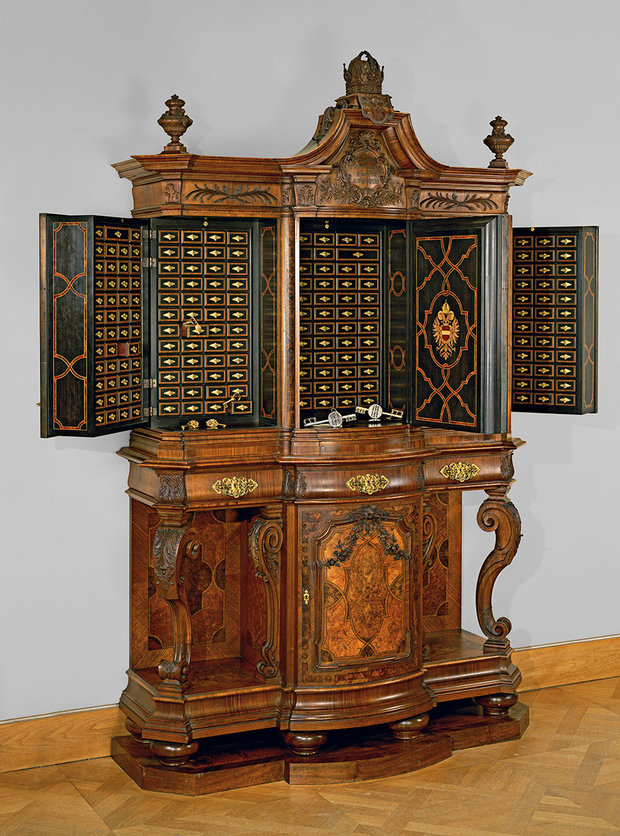 The keys to the coffins of the Habsburgs were traditionally kept in the Imperial Treasury.

It was Emperor Franz Joseph who had this magnificent cabinet—a domestic monument—made for their safekeeping. The cabinet with its 139 drawers, each inscribed with a name, recalls the deceased members of the imperial house beginning with Otto († 1339) and ending with Franz Joseph († 1916). The long series of Habsburg emperors is given pride of place: the keys to their coffins are kept in the compartments in the central portion of the cabinet.

The message imparted to a visitor to the Imperial Treasury, which was renovated and refurbished in the 19th century, was that notwithstanding all political and military setbacks, the Habsburgs compared to the French, Russian, or Prussian ruling houses of more recent lineage, would always remain the most ancient and noblest of Europe’s dynasties. 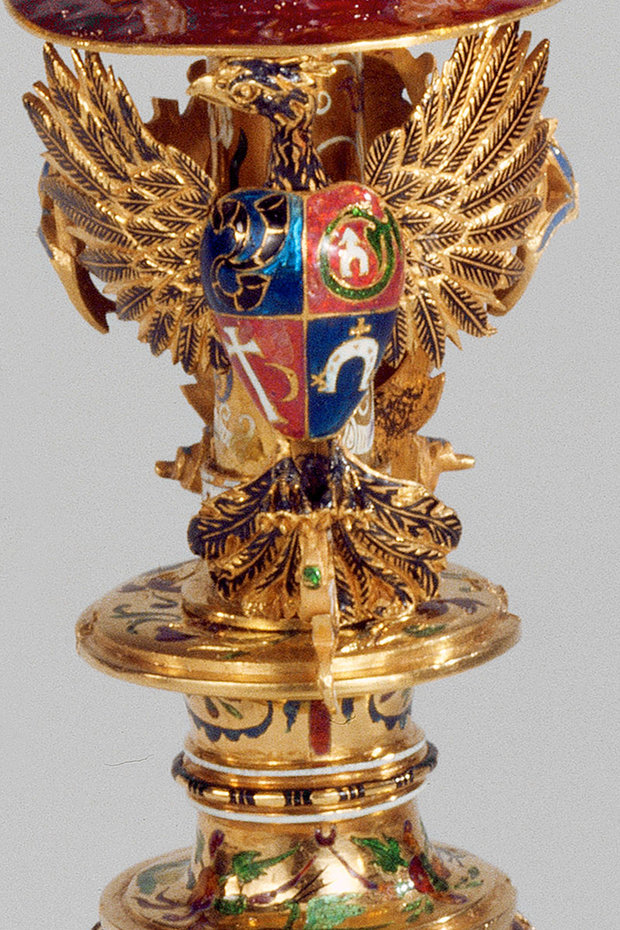 Through the aperture of this reliquary a piece of the arm bone of St. Stanislaus of Cracow, one of Poland’s national saints, may be seen.

The dedicatory inscription on the reliquary’s foot records that it was the gift of Jerzy Radziwiłł, cardinal of Cracow, who presented the object to Maria of Bavaria, wife of Archduke Karl II of Inner Austria. In 1592 he had officiated at the marriage of the couple’s daughter, Archduchess Anna to Sigismund III Vasa. Sigismund had been king of Poland since 1587 as well as grand duke of Lithuania. He inherited the Swedish throne shortly before his marriage. The reliquary is thus emblazoned with the three crowns of Sweden next to the arms of Cardinal Radziwiłł. The object bears witness not only to an exchange of diplomatic gifts, but also to the marriage policies of Europe’s dynasties.

A monument of European civilization 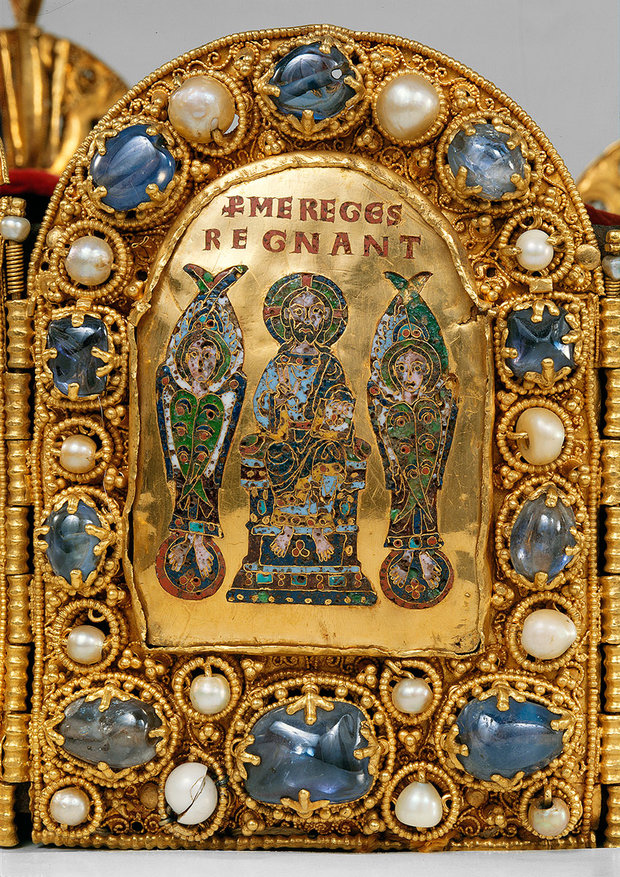 With this crown the emperors of the High Middle Ages documented their claim to sovereignty. They demonstratively asserted continuity with Western traditions.

By adorning their crown with an arch they sought to portray themselves as successors to Roman generals, or to Emperor Constantine, prepared to vanquish the foes of the empire under the sign of the cross.

The motifs decorating the crown also placed the emperors in a line of descent from Old Testament kings. Those who bore the crown emphasised that they had been chosen to rule by divine will: on the brow plate, the words per me reges regnant (“by me kings reign”) are put into Christ’s mouth.

The crown was associated from the 14th century with Charlemagne who is revered as a saint. This endowed it with the status of a reliquary.

The empire of Karl V–on which the sun never set 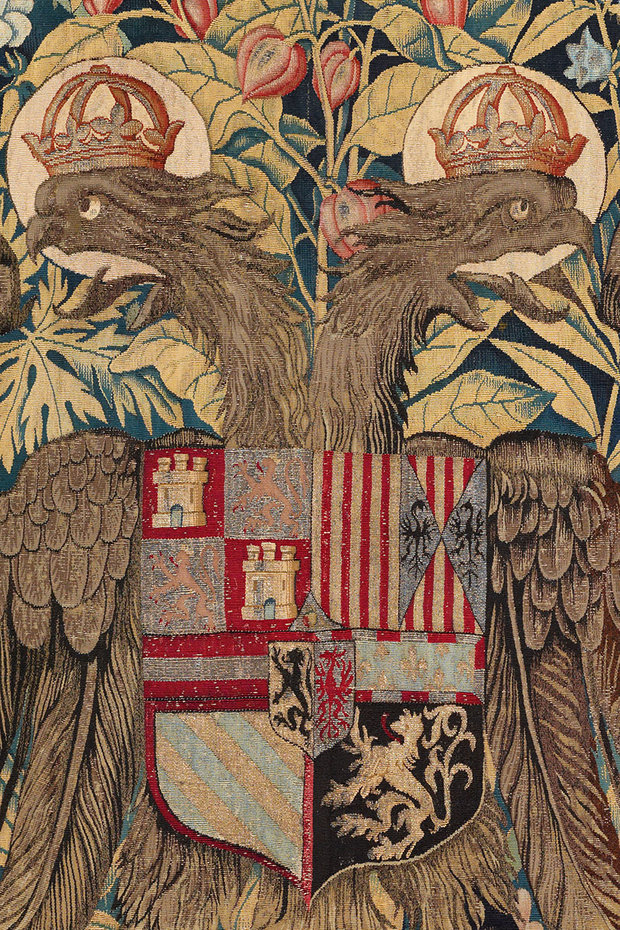 As tapestries are easily moved they could be hung at any location desired at short notice. By their coat of arms rulers could give concrete expression to current dynastic and political aspirations. Karl V identifies himself by this coat of arms as sovereign of a number of realms, lord of the Netherlands, king of Spain, and Holy Roman emperor. That was not all, however, Karl was also ruler of New Spain and Peru, hence it was no exaggeration when his empire was described as one on which the sun never set.